Establishment of Free Trade Agreement between India and the United Kingdom

Free Trade Agreement is a pact that is signed between two or more countries to remove all trade barriers while trading their goods and services. 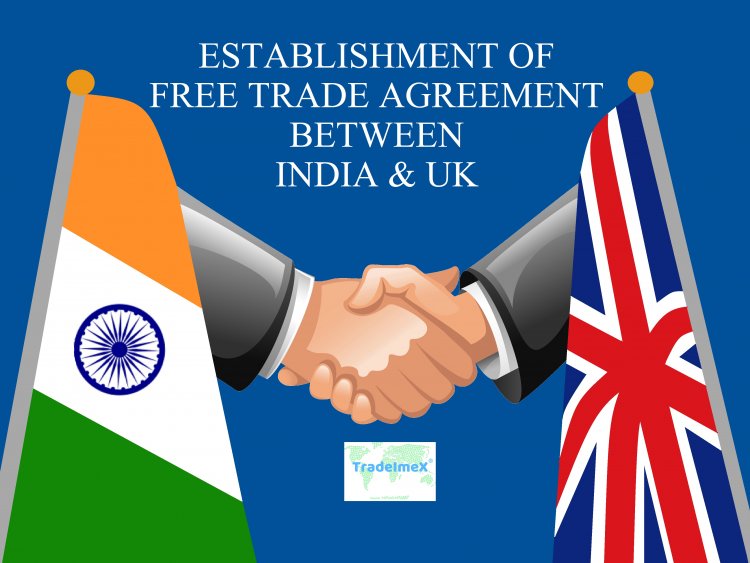 Free Trade Agreement is nothing but a contract that is signed between two or more countries to remove almost all trade barriers that come in the path of two countries while trading their goods and services. This contract applies to imports, as well as exports. By signing this pact, the two countries face no obstacles while trading with each other and complete hassle-free trade becomes possible which also leads to building strong relationships between the two or more countries that have signed the Free Trade Agreement (FTA).

One more plus point that arises due to FTA is that the signing countries can offer their customized and preferred trade terms and concessions on tariffs to partner countries.

There are mainly two types of Free Trade Agreements that are signed between countries.

WHAT IS INDIA-UK FREE TRADE AGREEMENT?

A flare of the Free Trade Agreement between India and the United Kingdom is shining brightly due to the visit of British PM, Boris Johnson to India on the 21st and 22nd of April 2022. Since then, intensive negotiations are going on between the two nations toward a Free Trade Agreement.

The new Prime Minister of the UK, Rishi Sunak is very much interested in closing this deal successfully. Rishi Sunak took the charge of leadership on 25th October 2022 and had a warm introductory call with Indian Prime Minister, Narendra Modi, and both communicated their commitments towards a successful deal.

The Free Trade Agreement between the two nations aims to reach close to 64% of total goods and up to 40% of total services. “This FTA will prove to be very beneficial for India as it can boost total exports of large sectors of the nation such as leather products, textiles, and footwear which will lead to a rise in employment in the country and hence reduce the percentage of unemployment in India. these industries contribute majorly to the economy of India and hence, will surely lead to a rise in employment opportunities”, said Mukul Chopra, Senior Partner, Victoriam Legalis – Advocates.

On the other hand, the United Kingdom is interested in accessing the markets of India for equipment of transport and electrical gadgets, medical devices, motor spare parts, hard drinks, and a few fruits and veggies. This will positively affect the local industry players and take the manufacturing sector to next level.

CURRENT TRADE RELATIONS BETWEEN INDIA AND THE UNITED KINGDOM

As per the data released by the official UK government, the bilateral trade between India and the UK is very much close to GBP 24.2 billion a year. The common aim of the nation is to double this number by 2030.

We are listing some of the random goods that are exported and imported between India and the UK for the year 2021 below. 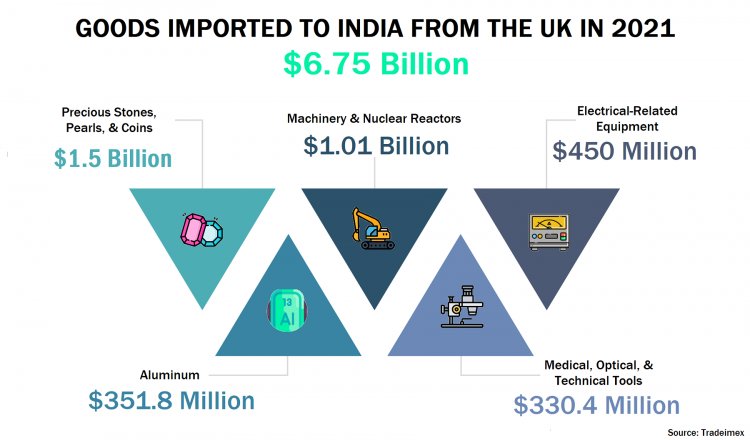 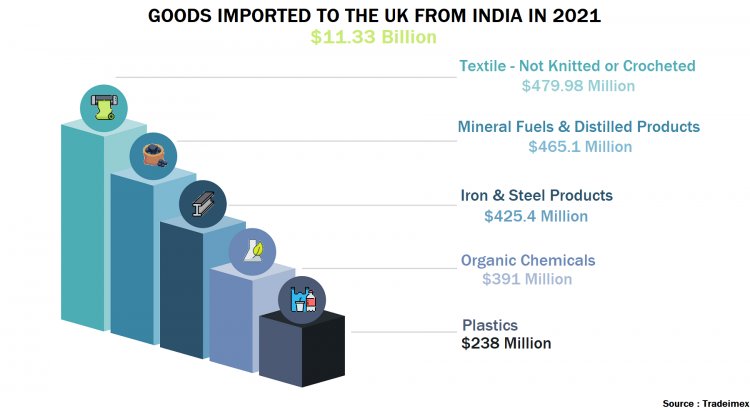 Refer to UK Trade data for more information about the nation.

FINAL VERDICT – WHAT WILL THE DEAL ENCOMPASS?

The main criteria for which the two nations are signing this pact is Defense and Security. By signing a Free Trade Agreement, both nations will develop and work together to build defense software and capabilities to tackle ever-increasing crime in the cyber world and minimize other terror actions and maritime domains.

Another part of this free trade will be that the UK will try hard to reduce tariffs on cars and whiskey. As India is one the largest market of Scotch Whiskey, the UK government will import the same from the nation by cutting tariffs up to 150%. Although there are some gaps in this aspect regarding the whiskey trade, both countries are into regular meetings to come at the same level so that balanced benefits go in either way and the Import Export Data of each country remains stable and profitable.

TradeImeX is monitoring all the ongoings from close and will bring the latest and updated information as well it is released by trusted sources.

IMPORTANCE OF THIS DEAL FOR THE TWO COUNTRIES

The India-UK Free Trade Agreement will be a very crucial and major step for the UK to minimize its dependence on the EU. While for India, it will be another amazing opportunity to promote the “Make in India” campaign and grab some amazing deals in sectors of cyber security, defense, health care, and R&D.

The trade barriers between the two nations will get reduced by a very big percentage which will encourage both nations to import and export goods and invest in each other’s countries.

As India is an emerging technologically advanced nation, the new and small tech companies will get easy access to the UK market and on the other hand, the UK will have a much greater market coverage than ever before.

Based on the statement released by the top government official, the trade negotiations between the countries are going in the right direction and soon both nations will arrive at an agreement. We can expect the confirmation anytime soon.

As per the estimates of TradeImeX in this regard, it is sure that after the FTA is signed between the two nations, it will truly help to boost the economy of India and will provide some support to the market of the UK as well. As TradeImeX provides UK Import Data and UK Export Data to its clients, you can contact us for any further assistance and guidance in this regard.

Mail us your query at info@tradeimex.in if you want further guidance and assistance from us.

Coffee is Becoming a Popular Export Beverage Amongst Vietnamese Trade...

Crude Oil – A Major Import Product of India from Russia

Mongolia Trade 2018 in a Glance